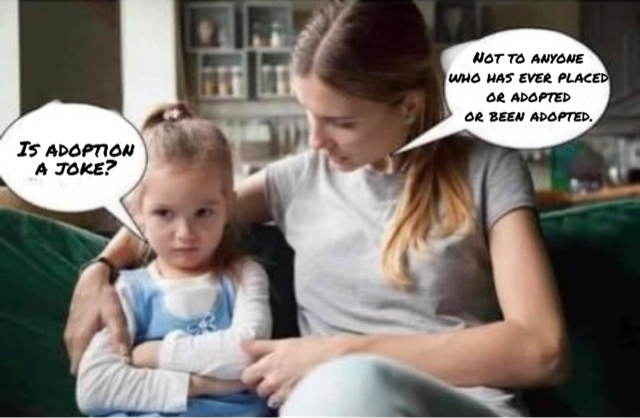 Is it fair to use adoption for laughs?

The question came up again this week, as a meme meant to be humorous made its way around the internet.

The heading reads “When parents start to crack during lockdown.” It pictures a child asking her mother if she’d been adopted, and shows the parent responding that it hasn’t happened yet because the ad was just placed.

Cue the laugh track for the uninitiated.

However, for most people whose lives have been touched by adoption in some way, this isn’t funny– it’s hurtful. Insensitive. Offensive.

This isn’t because adoptees, birthparents and adoptive parents are humorless. They like to laugh, too.

It’s because using adoption for laughs often triggers those to whom it’s been most important.

That’s not to say there are no funny moments during adoption– there are. Like mimicking the adoption professional you all love or loathe, or when prospective birthparents and adoptive parents get the giggles watching a newborn with the hiccups, or when a baby spits up on the judge’s robe at finalization. Yet there’s a difference, because none of those examples incur laughter at the expense of a triad member. And none of those jokes require a punchline that denigrates the value of the adoptee or any of his/her parents.

Should Using Adoption for Laughs be Off-Limits?

Lori Holden, an adoptive mom who is author of The Open Hearted Way to Adoption, shares an account of her discomfort with people using adoption for laughs. She made the decision to gently approach a parent who’d been joking in public about her bio-kid being adopted, and felt the encounter helped them both.

Adoptee Beth Hudson of Florida did this. She was horrified to see a Valentine’s Day card on the racks that used adoption for laughs, and she let American Greetings know. As it turns out, she wasn’t the only one who did! And the company pulled that greeting card from their inventory, as a result.

Yet for most adoptees and parents, it’s a dilemma to know if and how to respond to those who misuse adoption for laughs. Do you take the time to write a sitcom that airs an off-color adoption joke? Or just hold a family discussion about why we don’t laugh at joke like that? Or ignore it and hope your kids don’t notice?

When the movie “The Avengers” came out in 2012, it included a joke in which Thor tells another another character his brother Loki killed so many so often because “he’s adopted.” Adoptive parents expressed concern, while adoptees seemed to have a mixed response. Adoptive mother Carrie Goldman said she learned from this to let adoptees take the lead in voicing their reaction.

You’ll need to pick your battles, of course. Still, we encourage you to make it a teachable moment, whenever possible. Because kids need to learn by example how to manage adoption insensitivity in any form (or forum.) And because the only way our culture will become more respectful of adoption is if we all make the effort to teach others why it matters so much to us.

Humor is Subjective, but Adoption is Universal

To many of us, adoption is sacred. When it’s misused as a punchline, we have a visceral reaction. It brings out the mama bear or papa bear in us, which is a measure of how seriously we value that experience and how it changed our lives.

Yet it was Victor Borge who said “humor is truth.” Perhaps what stings about the circulating adoption meme is the truth that there may be parents out there who find the pandemic causes them to momentarily question their decision to become parents? (Some adoption experts already predict that Covid-19 is going to result in an upswing of adoptive placements.) That’s not funny, but finding a way to laugh about it may be a coping skill, in that it offsets the desperation behind the dilemma.

We’re guessing it’s this same sort of discomfort that causes judges at adoption hearings to joke with adoptive parents “you can’t give ’em back when they grow up and wreck the family car, okay?” It’s why birthparents sometimes kid adoptive parents after placement that “well, it’s your turn to change all the dirty diapers now.” It’s why some adoptive parents joke “after what the adoption cost us, this child better be a straight A student.” Adoption is universal, and its downsides (responsibility, grief, parental expectations) are inconvenient truths to which many can relate.

Adoption for laughs is a dicey proposition, though. (Just check out this link, “20 Hilarious Jokes That Only Adopted Kids Will Really Understand” and you’ll get what we mean.) What’s funny is in the perception of the beholder, but ultimately, we owe it to ourselves and the community to remember that truly, only good laughter is medicine.

So please, when referencing adoption for laughs: always choose your words (and your jokes and memes) wisely.