Every adopted person deserves access to the truth… because it’s their truth. 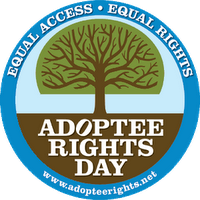 It may sound bizarre, but in the 21st century, it is still common practice for courts all across America to “seal” original birth certificates for children being adopted (in Texas, for 99 years following finalization) and issue a falsified government document that erases any record of the biological parents’ identity on what’s called the “revised” birth certificate. The adoption records are locked away by law, and even when those with serious medical conditions (or senior citizens who were adopted decades ago) seek to obtain their birth records, they are routinely told that the documents cannot be released to them without their parents’ permission or a judge’s consent.

This is the tragic result of a bygone era, when being born “outside of wedlock” was considered a lifelong stain on one’s reputation, and when folks mistakenly thought it was best for adoptees to never know they were ever adopted. (Learn more about the secrecy and shame of closed adoption era here.)

Clearly, times have changed, and society knows better now (or at least we should!) Illegitimacy is no longer a lasting social stigma. Open adoption research has documented the importance of enabling children being adopted to grow up knowing their origins. At Abrazo, we believe that the healthiest families are those with the least secrets, and we rely on the legally-contracted promises of our adoptive families to raise their children with knowledge of and access to their birthfamilies–from Day One, onwards.

Sadly, though, only a disappointingly-small number of states (Alabama, Alaska, Delaware, Kansas, Maine, New Hampshire, Oregon, New Jersey, Ohio, Rhode Island, Washington, Illinois and Tennessee) have been progressive enough to implement new laws giving adopted adults access to their original birth certificates. Texas is not one of them… yet. But all across the nation, adoptees are coming together in growing numbers to demand their civil rights, and at Abrazo, we support this movement wholeheartedly.

We beg you to join us in the fight to implement open records legislation and to recognize the right of every adoptee to own the truth of their own beginnings. Join STAR (Support Texas Adoptee Rights) to help bring about needed change in Texas, and back the Adoptee Rights Coalition to help change the world for the better.