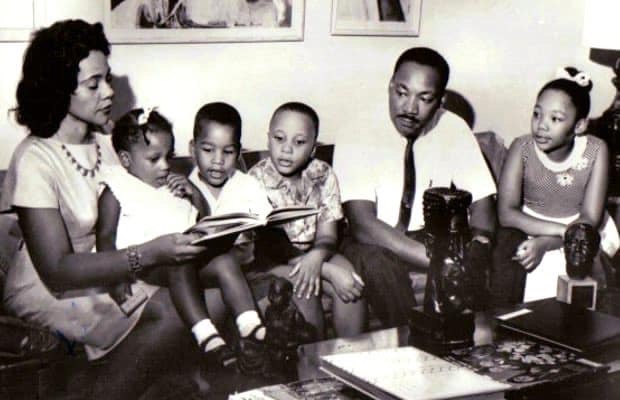 In one of the most famous speeches every heard in America, a pastor and father of four said “I have a dream… I have a dream that my four little children will one day live in a nation where they will not be judged by the color of their skin but by the content of their character.”

The day was August 28, 1963, the place was Washington D.C., and the man who was speaking was Dr. Martin Luther King, Jr., of course. Those famous words were about two-thirds of the way down in his speech that day, although they’re likely the most well-known words he spoke that day (read the whole speech here.) A breath later, he spoke of his hope “that little black boys and black girls will be able to join hands with little white boys and white girls as sisters and brothers.”

What Did MLK Think of Adoption?

From King’s iconic speech, many assume MLK was a strong proponent of transracial adoption– or would be? As Abrazo’s founder, I have to admit: I’m not so sure.

Dr. King undoubtedly followed biblical admonitions to care for the motherless. Clearly, he loved children of all races, and worried about the families of his followers, given the violence that threatened them. Still, in all of his public speeches and sermons, Martin Luther King, Jr. never seemed to have addressed adoption, specifically. (Other than an emphasis on the most famous adoptee of all, Moses, who led his followers out of Egypt and the oppression they suffered there.)

Aside from these examples, though, Dr. King left little evidence of how he would’ve felt about transracial adoption today. I suspect he would’ve been concerned about the unjust incarceration of black men, the abandonment of black mothers, and the excessive numbers of black children left to grow up in state foster care. Yet I think in spite of his call for black boys and girls to call white girls and boys sisters and brothers, King would have surely advocated for the preservation of family ties, and for African-American children to grow up with a strong sense of pride in their race and culture.

What Would He Say?

Dr. King would almost certainly have strong reservations about the consumer-driven adoption practices of today, with its excessive costs and exclusionary process. He would’ve been gravely concerned about the separation of refugee children from their parents, and adamant about the need for reunification (vs. involuntary adoption.)

The man who was known to remind his children and others “Life’s most persistent and urgent question is, ‘What are you doing for others?'” would surely have urged us all to do more to help keep families connected (through fully-open adoption, if not family preservation) and to eliminate white privilege in favor of human privilege.

There is, however, one way in which both Dr. Martin Luther King, Jr. and his father, Dr. Martin Luther King, Sr. could surely relate to adoptees of today. Both men had original birth certificates that differed from the names by which they grew up, for both were originally named Michael King at birth. Daddy King took the name Martin Luther as a tribute to the German reformer after the death of his father-in-law, upon assuming responsibility for his church, and his son followed suit.

They understand the powerful importance of names, access and freedom, so they certainly would’ve advocated for the adoptee rights movement, as well. Closed adoption records are one of the shamefully-unresolved violations of civil rights today. The King family likewise knew the need for the disenfranchised to be heard, and would surely have taken a stand for adoptees of all backgrounds.

Those Left to Carry the Banner Forward

One friend of the Kings was the Queen of Gospel herself, Mahalia Jackson. Mahalia, who had raised money for the Montgomery Bus Protest, was at the Washington March. She had informally adopted an abandoned ten-year-old she found at a bordello and raised him in her home in Chicago. His name was John Sellers, and he too became a renowned gospel artist. It was she, reportedly, who urged King to share his “I have a dream” story in that famed speech in Washington that day, something some say he’d done only as an after-thought.

Another of King’s followers was Josephine Baker, an entertainer who adopted 12 children of different races– but only after fleeing the racism of America to live in France. Baker stood next to MLK during the March on Washington in 1963, the day he gave that great speech. And she reportedly declined Coretta Scott King’s invitation to take over the Civil Rights Movement after King’s death, out of concern for the safety of her Rainbow Tribe.

Of Martin Luther and Coretta Scott King’s four children, three are still living and carrying on their legacy today. The late couple has just one grandchild, a girl named Yolanda, now aged twelve.

There are countless others, though, who carry on King’s legacy, like Beatrice King, Dexter King, and Martin Luther King III; contemporaries Jesse Jackson and Congressman John Lewis, and Rev. Al Sharpton; and all who take to the streets to march on MLK Day. Whether your dream is adoption, personal success or world peace, always remember that civil rights is the foundation for anyone who says “I have a dream” and strive to make that a shared goal– in memory of the Kings.