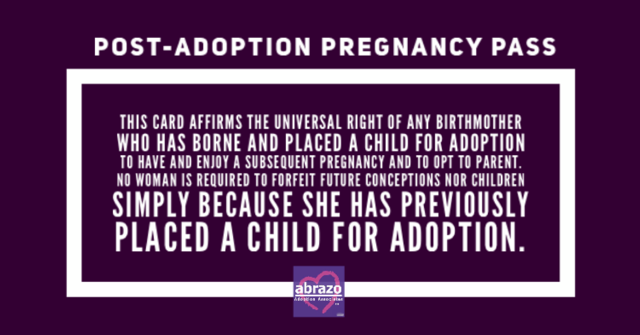 Dear Birthmother: if you feel conflicted about having another pregnancy after placing, allow us assure you! You have every right to have another child in the future. You are entitled to parent after having placed. (And if you placed through Abrazo, know that your agency and your placed child’s family will wholeheartedly support your right to parent, if you so choose.) You do deserve this. (And you do have every right to celebrate.)

It’s a troubling fact, however, that a certain number of birthmothers experience secondary infertility after relinquishing a child for adoption. (The reasons for this are still unclear to researchers.) According to a 2010 study by Isabel Andrews, 40-60% of mothers that place do not go on to bear other children. That is a staggering statistic, and frankly, it breaks our hearts.

Those who have experienced infertility or work with those who did would never wish it on anyone– least of all, someone who voluntarily placed her child for adoption.

Why do some birthmoms avoid pregnancy after placing?

Some birthmothers, particularly in the closed adoption era, were so traumatized and shamed by the placement experience that they felt unworthy of ever becoming pregnant again. Margaret’s only son was “adopted out” in the Baby Scoop Era. She said the nuns at the maternity home she delivered at told the mothers they were “damaged goods” for having had a child out of wedlock. “That put the fear of God in me about ever getting pregnant again,” she said. “I thought no child deserved to grow up with the likes of me.” She’ll always wonder what motherhood might have been like, she says? But now in her seventies, she knows she’ll never know.

This doesn’t just impact birthmothers from closed adoptions, though. Mariah* (name has been changed) placed a baby for adoption more than a decade ago. It’s an open adoption, so she’s still in touch with the child she placed. (The adoptee, in fact, participated in Mariah’s wedding five years ago.) Mariah’s husband would like very much to have a family. Yet the couple is struggling with Mariah’s belief that would be unfair to the child she placed to get pregnant again and parent this time. The adoptee’s parents worry that Mariah’s sense of reproductive obligation to the adoptee is misplaced. They don’t want this to endanger her marriage. They, along with Mariah’s husband, have tried to assure Mariah that the adoptee would not want to deny her the right to parent for having once placed, to no avail.

It would be an unfair burden for any adopted person to know that their birthmother never allowed herself the joy of bearing a child she could parent simply because of their adoption. Most adoptees would never want their birthparents to do “lifelong reproductive penance” for having chosen adoption for them. Many, in fact, would welcome the opportunity to have and know their birthsiblings. (Especially since sociologists affirm that sibling relationships are most people’s longest-lasting relationships in life.)

Mariah feels her loyalty to the adoptee is a mark of respect, not a symptom of guilt. Nobody is questioning her right to make her own reproductive decisions. Yet her admission that she would want to start a family with her husband if she hadn’t placed her firstborn for adoption indicates that this is an adoption issue. Mariah and her husband would both likely benefit from skilled couples counseling with an adoption-competent therapist.

Things to Know about Pregnancy After Placing

The timing of pregnancy after placing does matter, of course. Grieving birthmoms are often urged by misguided others to “just have another and keep the next one.” But allowing one’s body time to heal and one’s spirit to recover is essential. Some birthmothers subconsciously allow themselves to fall into sexually-vulnerable positions after relinquishment in an effort to “fill up the emptiness.” Beware, though: a pregnant too soon after placement often just compounds a birthmother’s stress and sense of loss.

Counseling during pregnancy and after birth may be a useful tool in managing triggers and enhancing parent-child bonding. Remember: any future child/ren born to a birthmother who previously relinquished can never and will never replace the child who was placed for adoption. (Nor should they have to.)

Birthmothers may feel sensitive about sharing pregnancy news with their child’s adoptive family. Sometimes, it’s awkward, knowing the adoptive parents have infertility and cannot experience a pregnancy for themselves. Occasionally, birthmoms fear that the adoptive parents may want to adopt the next baby, too (something they should never suggest, even as a joke.) Yet adoptive parents should be told in advance of the adoptee learning of the sibling, so they can help the adoptee understand.

Finally, remember that adoptees may need time to process their own emotions about the birthmother’s new pregnancy. Some worry that the new baby may cause the birthmom to forget about them, and need assurance. One Abrazo adoptee felt angry with his birthmother for getting married and having a baby with her husband. His adoptive mom and birthmother kept in touch, of course, while he took some time off from being in contact with his birthmom, hard as it was for her, but a recent in-person visit with the birthmom and her family during her second pregnancy has helped him feel more secure with the special place he holds in both families.

If you’re experiencing secondary infertility after placing, you can find options and support at Resolve. For more information about pregnancy after placing, visit What to Expect from a Post-Relinquishment Pregnancy and then, call Abrazo to set up a congratulatory hug or a free counseling appointment, as needed: 210-342-5683.