Just a Piece of Paper 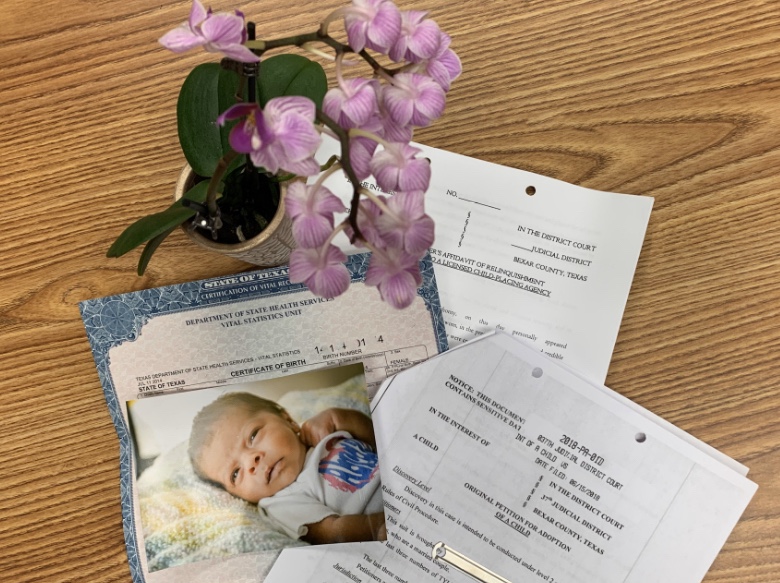 “It’s just a piece of paper,” she told herself, as she sat in her hospital bed, contemplating the legal document that would change everything forever.

Three days ago, she’d delivered the result of an unplanned pregnancy that happened nine months earlier. She’d been a working girl at a truck stop back then, when addiction had clouded her judgement. Now, she was clean, sober and painfully sure adoption was the best choice she could make for her baby.

She’d already chosen her baby’s new parents. Gotten to know them. Went through counseling. Spent ample time loving on her baby in the hospital. Signing the relinquishment paperwork was the last thing left to do. The legal document was long, and the print was small. Two witnesses and a notary public sat nearby, shifting uncomfortably, eyes averted to respect her privacy.

Just a piece of paper… to give up a baby

“I freely, voluntarily, and permanently give and relinquish to the above-named agency all of my parental rights, privileges, powers, and duties. I consent to the placement of the child for adoption by this agency.” The relinquishment document used by Abrazo is six pages long. (And it’s that long for good reason.) It lists all the duties, privileges and responsibilities of a parent, as defined by law. It documents that the signer is aware of all their rights and alternatives. And it affirms they are voluntarily choosing to surrender all parental claims forever, in the best interests of their child.

An agency relinquishment in Texas cannot be signed until at least 48 hours after birth, although a parent can take whatever time they need, before signing. Once it’s properly executed, though, it can never be revoked. It’s just printed on normal paper. Once signed, though, it’s just a piece of paper with the power to forever alter the lives of the birthparents, the adoptive parent/s, and the adoptee.

Signing those papers is different for everyone. For some birthparents, it’s the emotional equivalent of an amputation. For other, it feels like merely a legal formality. It has the power to make parents of an infertile couple, and to turn a child into an adoptee. Yet relinquishing gives birthparents the cultural status of ghosts, since it cancels out the role of the very parents who made that child’s existence possible.

Legally, the bio-parents no longer exist. Yet in truth, the birthparents who sign those papers will become more important than ever as their child grows and questions their absence– or benefits from their continued presence, if the adoption is open. And the birthparent’s emotional journey following relinquishment, whether an adoption is open or not, continues to impact them over the months and years that follow, proving it was about so much more than just a piece of paper.

Just a Piece of Paper… to become parents

When Abrazo’s adoptive parents receive an adoption decree, it marks the end of the agency’s legal right to direct and oversee the adoptee’s care. It’s where the “rubber meets the road,” because from here on out, the adoptive parents’ adherence to their open adoption promises becomes the true measure of their integrity. They’re just like “any other parents” under the eyes of the law, the judge tells them. (And yet, the importance of that piece of paper to them still seems to dispute this, somehow?)

An adoption decree says the adopted child now belongs to you and only you, but the truth is that you belong to that child, along with his or her birthfamily. (Always remember this.) It’s your job to teach your child how to integrate their biological and legal memberships in a way that makes sense to them, if not to the rest of the world. A piece of paper can’t do that; only the best of parents can.

Just a Piece of Paper… to affirm your identity.

The most important piece of paper in any adoption is also the most often falsified, and that is the adoptee’s birth certificate. Back in 1917 in Minnesota, the courts made the decision to legally alter adoptees’ original birth certificates, to protect children from the stigma of illegitimacy.

Ever since then, across America, the original birth certificates of adoptees have been sealed by the courts when placement occurs, and an altered (legally-falsified) birth certificate is reissued, removing the birthparents’ names and replacing them with the names of the adoptive parents, showing the adopted child was born to them instead.

All the paper that goes into documenting an adoption decision doesn’t define who you are. That simply documents what’s been done. The potential within every placement depends on the people involved and the bonds you form and grow over time.

Everything else is just a piece of a paper.