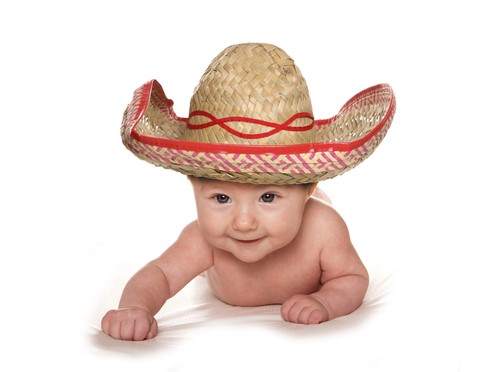 The Fiesta San Antonio baby story is one of our favorite Fiesta memories of all time.

It happened during Fiesta many years ago.

Abrazo’s staff was having lunch at El Mercado, when the pager went off. (Many years ago, remember?)

Elizabeth called the answering service to check in.

“Ms. Elizabeth, there’s a mama on the other line who says she’s having a baby and needs some help?” the operator said.

Elizabeth told the operator to patch the call through, so she did.

Elizabeth learned that the mother-to-be had just arrived at a local hospital, so she and her staff got their lunch packed up to go, and they headed immediately to that hospital.

Once there, they met the young mom in Labor & Delivery, where she had already been admitted.

She had been hiding the pregnancy from her family, she said, because she didn’t want them to know.

The baby’s father was a one night stand, and she’d never exchanged last names or phone numbers with him, so he was long gone by the time she’d realized she was pregnant.

Her family was very strict, and she feared they would make her life miserable if they’d known she was expecting.

Her mother had dropped her off for work that morning; the mama-to-be worked at a kiosk in the local mall. She’d gotten no prenatal care, so she had no idea how far along she was, but she knew when her water broke an hour into her shift that the baby was on its way.

“It’s not the baby’s fault, I know that,” she said. “But I’m not ready to be anyone’s mother. I still live at home with my own parents. I don’t want them to punish me or my baby.”

Abrazo’s staff counseled with her about her options. They encouraged her to take her time to consider all her alternatives, including foster care, parenting, and breaking the news to her family so she knew whether they might help her?

They talked with her about the emotions that birthmothers who place usually experience, and about what adoptees need to know about their birthfamilies and their adoptions. They offered to stay to support her through the delivery, if needed.

She delivered within a couple of hours, a beautiful healthy baby.

Then the hospital social worker called Abrazo again. “I know you were just here, but can you come back, please? The patient wants to leave the hospital already.”

The hospital social worker put the newly-delivered mom on the phone. “I can’t stay,” she insisted. “My mom is picking me up at the mall, and she’ll get suspicious if I’m not there.”

Abrazo urged her to stay in the hospital and recover from the delivery. The social worker begged her not to go. But the baby’s mother was adamant: she would not stay! and after signing a third party hospital release so the baby would not be considered abandoned at the hospital without her, she checked out AMA, and took a cab back to the mall, where her unsuspecting mother picked her up.

“Stronger than I thought…”

On the day that relinquishment was to happen, she called to ask Abrazo to come to the mall to do her paperwork with her there, on her break.

When she met Abrazo’s staff at the food court to sign her relinquishment forms allowing her child to be adopted, there were river barges bearing dozens of unsuspecting tourists and mariachis entertaining them.

“Are you sure you don’t want to go to our office, or somewhere more private?” Abrazo’s staff asked her.

“No, this is good,” she said. “It’s the hardest thing I’ve ever done. But every day, when I walk through here, this will remind me that I’m stronger than I thought I was.”

She did later meet with the adoptive family that she chose for her child. (At the mall, of course.)

We don’t think she ever did tell her own family about that baby, despite our hopes that she would. It was her choice to make, of course.

She went on to marry her next boyfriend, and have a family of her own. We hope she found the courage to share her story with them.

And we hope the child that she placed, many years ago, knows of her courage and her love.

We hope that child never doubts she did the best she could, given her circumstances at the time.

And we trust that Abrazo’s Fiesta San Antonio baby grew up with a very special affinity for mariachi music, cascarones and all the joy that Fiesta in San Antonio is all about.